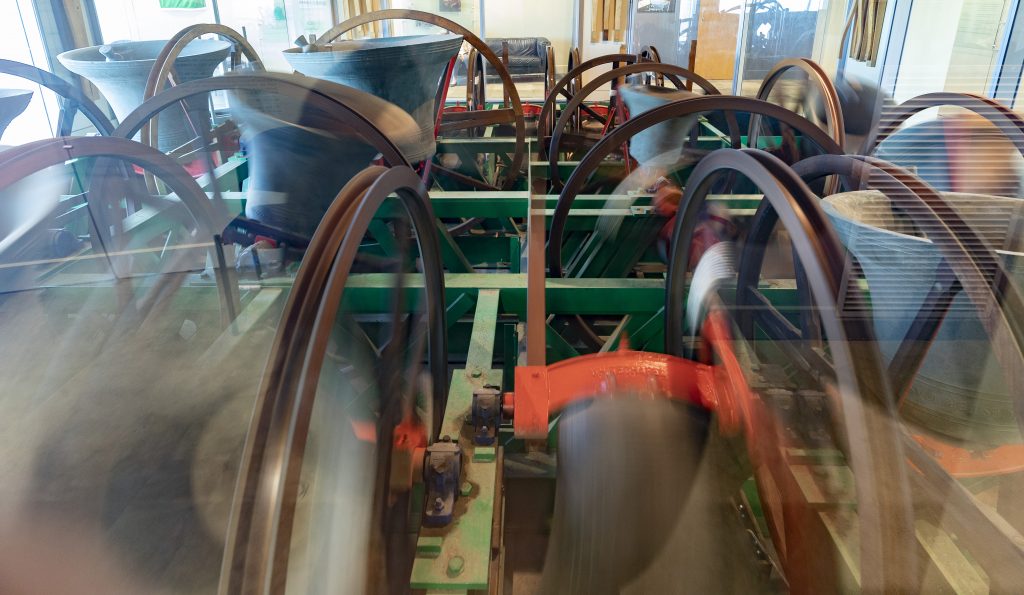 News and goings-on at the Bell Tower

We had a fun day on Sunday 9 October chiming bells for Telethon. Thank you to everyone who came and made a donation. There was some very enthusiastic chiming! And it was great to chat to so many visitors.
Thanks also to Fat Cat, who showed us that he is an expert bell chimer! Did you catch us on air presenting our cheque to Telethon?

In early July 2022 Perth said good bye to its beloved elephant, Tricia, who died at Perth Zoo aged 65. We rang a half-muffled quarter peal for Tricia – perhaps the first ever rung for an elephant! The last two minutes of the quarter peal can be heard here: https://www.youtube.com/watch?v=R9OD7qf19sM

On WA Day, 6 June, a band at the Bell Tower joined ringers all over the world in ringing  for the Platinum Jubilee. The quarter peal of Grandsire Triples, which was conducted by Adam Beer, took 47 minutes.

On 1 March 1942 HMAS Perth (I) and USS Houston were lost in the Battle of Sunda Strait. This year we joined the commemorations with two performances, one of which was a half-muffled quarter peal of Grandsire Triples, just after the official opening of an exhibition at the Perth Town Hall.

On Sunday 27 February 2022 we  helped celebrate the 45th birthday of community radio station RTRFM. While the main celebrations went on in Fremantle, we made glorious music in Perth. If you missed the interview with Mike, our tower captain, you can listen to it here:

On Sunday 28 November 2021 we joined ringers and musicians around Australia in the Sounds of Time project. Members of the band rang handbells to the notation of the hymn Conditor alme siderum (Creator of the Stars of Night).

One of our members, Rhys, programmed the carillon on level six of the Bell Tower to play the hymn. The carillon played throughout the day.

Sounds of Time commemorates the 700th anniversary of the first mechanical clock to play a named tune, Conditor alme siderum. The clock was installed in St Catherine’s Monastery, Rouen, France, in 1321. This makes the hymn one of the first examples of recorded music!

This event was a collaboration between churches, secular musicians and the Australian Research Council project The Sounds of Time. You can find out more about the project at http://soundsoftime.org.

Quarter peals and other special ringing by members of our band